Today, Ron and I participated in the local Window Wonderland contest. Various shops post holiday-related riddles in their windows. This year’s theme is Christmas movies so each riddle is a clue about a movie. You have to determine the title and answer the questions. There’s about 50, probably more. If you get them all right you’re entered to win $1,000 cash. If you get at least 15, you’re entered to win $500. It was pretty fun and definitely some good exercise. I guess we’ll see how we do.

Remember the Titans is on ABC Family tonight. Ron loves this movie. It is pretty great and the soundtrack is amazing. The music makes the movie.

Tonight Ron and I watched the Woman in Black. It was okay. Some parts were actually creepy, but the ending left a lot to be desired. I think the movie wore Buddy out though because there’s a dog in the movie and when it would bark, Buddy would look for the dog. He finally built himself a little cave and sacked out. Or maybe he was hiding from the woman in black.

Tonight I took Ron to see The Avengers. I wasn’t really interested in the movie, even though I liked the Iron Man movies, but I knew he wanted to see it. So as apprehensive as I was going into it, I actually really liked it. It’s an action movie, but it has some comedy in it, which is nice. Also, it’s penned and directed by Joss Whedon. As a huge Buffy fan, I shouldn’t have been surprised that it would be good. Whedon is awesome. The movie is definitely worth the $9.50 a ticket, which is kind of crazy seeing as how you’re only paying to use a less than clean seat for a few hours. Such a racket.

Tonight, Ron and I rented Young Adult. It was okay–not great, but not terrible either. Charlize Theron’s character, Mavis, is pretty messed up and I feel bad for her Pomeranian, Dolce, because he just seems neglected. But the movie is interesting in terms of watching her train wreck and hoping for some sort of correction. 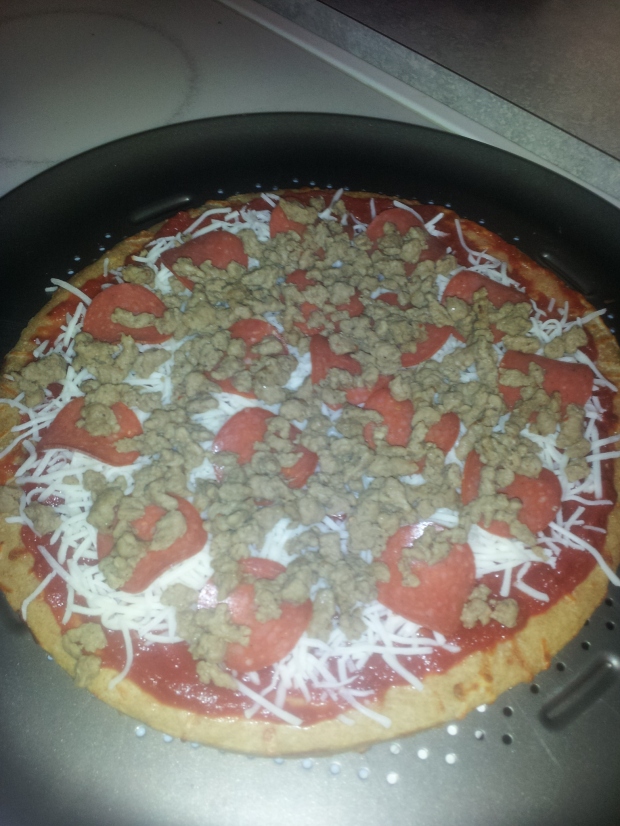 Ron and I made a pizza tonight for dinner. Trying to make it healthier, we used a whole wheat crust, organic pizza sauce, reduced fat mozzarella, turkey pepperoni and turkey sausage. It turned out amazing, my cell phone pictures don’t do it justice, and it was nice to make dinner together. Plus, pizza is so simple to make and it can be customized a million different ways. We’ll definitely be recreating our recipe in the future. While eating our pizza, we watched Moneyball, which I had given Ron for his birthday. It’s such a good movie, but really, when is a sports movie ever bad? Even the dumb ones like The Replacements are still good. 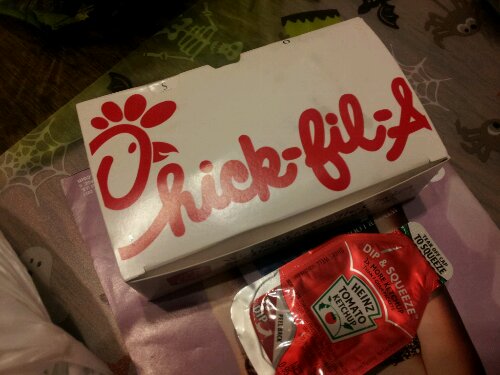 Ron and I went to the movies tonight and saw Paranormal Activity 3. It was pretty good, better than the second one. After the movie we stopped at Chic-fil-a and that’s when it got a little weird. There was a woman behind us with two kids, a boy and a younger girl, maybe 3 or 4 years old. The little girl was crying, like one of those gasping for breath, coughing kind of cries. The woman kept asking her to stop crying and saying things like “I’m going to go get your cup. If I get your cup will you stop crying?” I never saw her go anywhere, but I heard the little boy say, “No, get her what she wants, she’ll be okay.” It was almost like he feared for the little girl. For some reason the woman talked to the kids more like she was a babysitter or something, but the boy called her mommy. At some point she picked the little girl up, toted her out the entrance, left her there and came back to the table with the boy. Chic-fil-a is one of those places that has an exterior door, then a little glass hallway, then an interior door. The little girl is wailing in the hallway between the two doors while the woman is ignoring her at the table. She would have felt pretty dumb if someone opened the door and snatched the girl. I know I’m not a parent, but the whole thing seemed twisted. It’s the only time I’ve ever though about calling CPS. You shouldn’t put a child basically outside in the dark by herself in a public place right off an interstate. Not smart.

I’ve long had this theory that the food we’re eating is making us sick. The reason we have high occurances of cancers, diabetes and other ailments is because the things we’re eating aren’t created properly. As a society, we’re being lied to. We go to that fast food joint and buy what is labeled as a “cheeseburger.” But how much of that little patty sandwiched between two seseme seed buns is actually burger? Are you aware that 70 percent of burgers contain a meat filler product that has been washed in amonia in order to kill e-coli? Amonia, if ingested in its usual form, requires medical attention, so then why is it okay for companies to be using it to clean our meat? And we wonder why people are sick? The other night, as I was watching television and Ron was snoring in the bed beside me, I watched the most amazing documentary on PBS: Food, Inc. Basically, a filmmaker started out creating a film about how food gets to our tables, but along the way, he uncovered the corruptness of the American food system. Decades ago, there were dozens of slaughterhouses in America–now there’s only 5-6. So all these cows, one of which may be sick, are filtered through the same places. Since e-coli is transmitted through feces, which cows spend lots of time standing in on some farms that don’t allow their animals to free roam, it’s rather easy for one sick cow to infect a ton of cows. And, since they all go to the same slaughterhouses, the meat from those sick cows gets mixed with the healthy cows and bam, we have sick children and massive recalls. There’s a woman in the film whose two year old son, Kevin, contracted e-coli and died in less than 20 days. She later found out e-coli had been discovered in this particular companies meat before her son contracted it, but a recall wasn’t actually issued until after he had died. How insane is that? In our country, the idea is why make it right when we could make it faster, bigger and larger. Why go through the process of raising a chicken in three months, when we could inject it with hormones and have it ready and larger in 39 days? Well, is that 39-day chicken even a chicken or is it some sort of psuedo chicken? I’d much rather wait my three months for a nice, healthy chicken than eat the robo-chicken. Not to mention, there are pesticide companies making genetically modified seeds which are then resistant to their pesticide. And since genetically modified foods can be patented by said company, any farmers not using the seeds and trying to save their own seeds can be charged with patent infringement. These poor farmers, just trying to carry on their generations-long family farming traditions, are being bullied by billion dollar companies. Now, I’m aware that I may sound like a liberal whack job, and it’s okay if that’s what you think. But, personally, I’d rather pay a little more for free-range, antiobotic-free chicken than eat the robo-chicken. I’d rather buy an organic potato than buy one that comes from a seed that was invented in a lab by a company known for creating pesticides. If I can buy an organic carrot and maybe lower my risk of getting cancer or diabetes, isn’t that with the extra dollar? I think that’s worth some thought. And, I highly recommend the movie. It can be found on Amazon, at your local library and I believe PBS is showing it again Aug. 28. I’ve included the trailer for it below.

I’m getting ready to watch Insidious. I love a good scary movie so I hope its actually good. Ron hates scary movies so its hard to get him to watch one. I think he gets scared.

I’m waiting for Harry Potter to start. Last one. This ends a decade of midnight showings. Sigh.