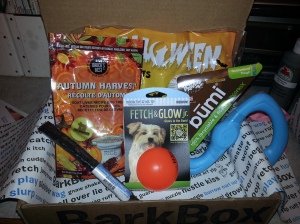 I signed Buddy up for BarkBox about a year ago using a deal I found on Groupon. It just looked too good to pass up and it must have been, because he’s been obsessed ever since.

Each box, which is sent out on the 15th of every month, usually has about five or six items in it and includes toys, treats and accessories. We’ve gotten everything from balls to salmon treats. For the most part, Buddy has loved everything, but he definitely has his favorites including a plastic treat ball and a once-stuff yellow zucchini. The only thing he really didn’t care for was a wool mouse which cause a serious coughing fit. I think wool isn’t his thing, so on the rare occasion when he gets a wool toy, we just 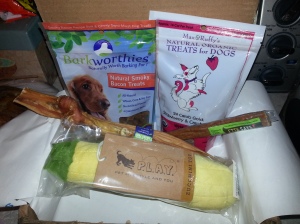 store it in the closet. He always loves the treats that come in the box and we haven’t purchased treats since signing up. Also, he loves when they send him the occasional bully stick, although he probably eats them way too fast.

The one thing I do wish is that they’d come up with more indestructible toys. Buddy may be small, but he is mighty and toys don’t last very long when he’s involved. He always destuffs any stuffed toy, pulls out the squeaker and makes a total mess. He does continue to play with them though after so I can’t 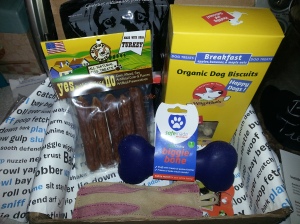 complain too much. Even the toys that are marked as tough get destroyed. With any of
the rubber toys, once he starts breaking the rubber off in pieces, I take it away. Even though it appears like he just chews it off and spits it out to move on the next piece, I can’t risk him swallowing it. That could get expensive quick.

Besides the toy suggestion, I really don’t have any Barkbox complaints. The boxes are great and the customer service is amazing. 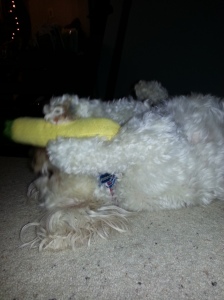 Each month they send a survey to see how you liked your box and ask for suggestions on products for future boxes. I suggested Bowser Beer (a non-alcoholic dog beer) on a few surveys and lo and behold it showed up in a future box. You really can’t ask for more than that. I would say there’s an interesting conditioning thing that comes with subscribing to Barkbox. Everytime I get any box in the mail, Buddy automatically thinks it’s for him. He’ll jump around and try to attack it until he finally realizes it’s not his box. Silly dog. I can’t imagine how that works with large dogs and mailmen…

If you’re interested in checking out Barkbox, click here or use any of the Barkbox links contained in this post to save $5 off your first month. Buddy will thank you because he’ll also get a free box added to his subscription. Plus, proceeds from every box go to animals in need which is a really cool additional feature of subscribing.

I did not receive compensation for this review. It represents my own (and Buddy’s) experience with Barkbox. 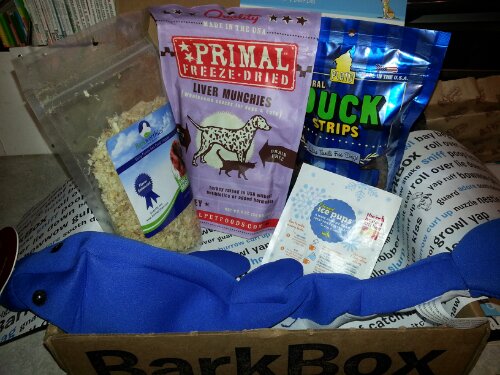 Buddy’s August BarkBox came today.  It features a water theme. He got duck treats, shredded bully stick treats, another type of treats, some sort of broth mix and a dolphin. He’s a treat dog so he’ll love this box. We haven’t given him anything out of it yet, because we gave him a stuffed duck toy that we brought home from the beach instead. Which he destroyed in just a few minutes. 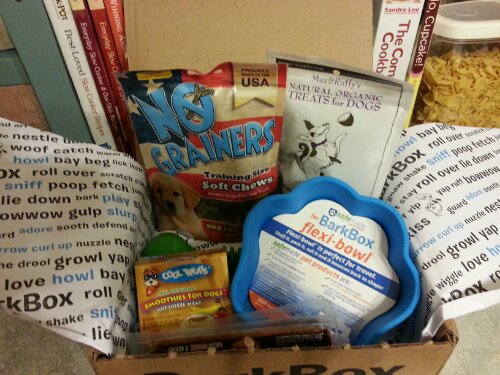 Buddy’s July BarkBox came today! It had tons of treats in it plus a toy and a flexible bowl. It was right on time too because Buddy was out of treats and he’s definitely a treat dog. 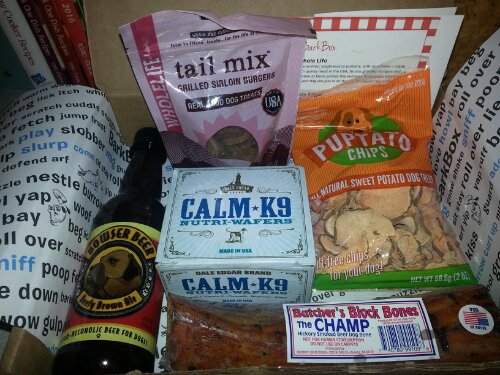 Buddy’s June BarkBox came today! It has a July 4th picnic theme and includes Bowser Beer, a massive Champ bone, Calm K-9 wafers, Puptato Chips and Tail Mix burger treats. Ron and I are pretty excited about the Bowser Beer. It’s an all-natural, non-alcoholic dog “beer.” We saw it months ago on some post and have been wanting to get some for Buddy. I’ve suggested it to BarkBox for months on every survey they send it out so it’s awesome to see it show up in this month’s box. Can’t wait to have Buddy try it. 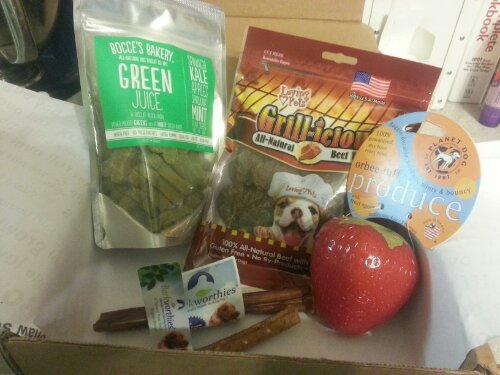 The May BarkBox is here! There are lots of treats this time which is great because Buddy loves treats. Included this month were two bullysticks, a bag of green mint bones, a bag of grilling treats which look like little hamburger patties and a fruit-shaped toy. Buddy already ate one of the bullysticks and he has some toys left from last month’s box so this one is perfect. I also really like that they switched out the usual blue shredded paper in favor of a thick sheet of tissue paper. It’s much cleaner and the paper doesn’t get stuck to all of the items. 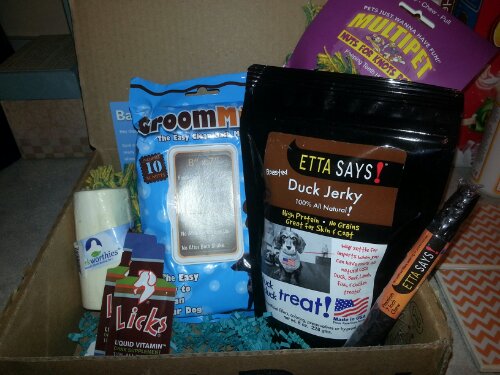 Buddy’s BarkBox came today. It was actually supposed to be delivered yesterday, but went a little mia somewhere in the postal system. Better late than never. This month’s box has duck jerky sticks, a duck bully stick, two vitamin supplements, a bone stuffed with something, grooming wipes and a rope toy. I was pretty impressed with the amount of stuff in the box. It’s definitely one of the larger ones we’ve gotten. And Buddy completely knows that the boxes are for him now. We always set them on the counter and he was trying to jump up and check it out. He’s a BarkBox fan. 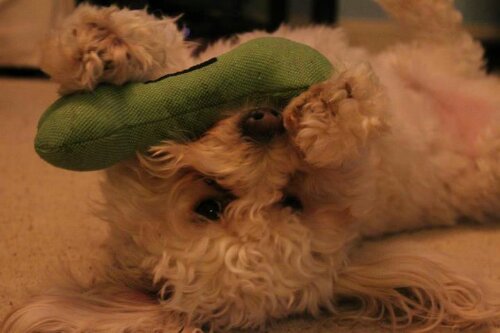 When I got home from work, I gave Buddy one of the toys out of his new BarkBox and he loved it! He was tossing it around and chewing on it. He later destuffed it, which is his usual course of action because he likes to dig the squeakers out. I’d say this one was a winner. Plus, when he gets bored with this one, he still has the mouse to play with from the same box. 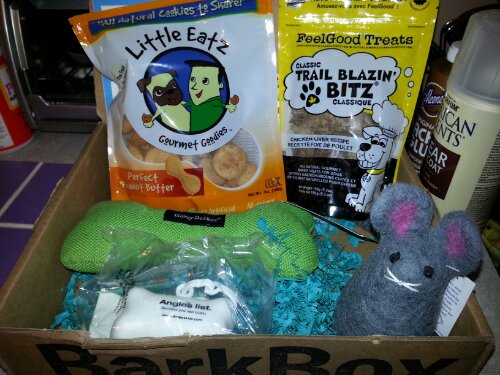 Buddy’s March BarkBox came today! This one was pretty awesome. It had two bags of treats, a little bone shaped poop bag holder, a bone shaped toy and a wool mouse. We had issues with last month’s wool kangaroo toy, but I think this one will be fine. Last month’s had coconut fibers in it, which I think was the issue. This month’s doesn’t seem to have those so I think it’ll be ok. We’ll just have to watch Buddy when he’s playing with it to make sure he doesn’t have any problems with the wool. I’ve read some dogs are allergic to wool. Overall, this month’s BarkBox seems to be pretty great and I’m sure Buddy will love it. He seems to know now when a BarkBox comes. He kind of hangs around the counter where we set it, waiting to get something out of it. 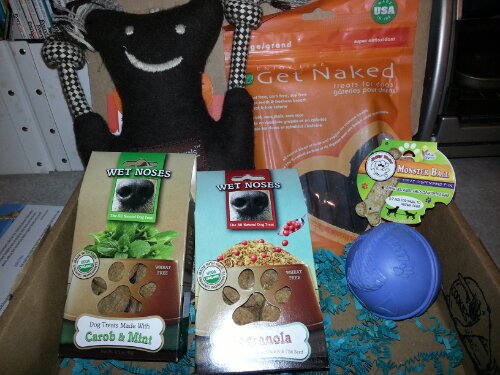 Buddy’s latest BarkBox came today! It had two bags of treats, a treat dispensing ball, a bag of bones and a toy. Usually the toys are great, but this one made me nervous. It was a wool toy filled with a straw-like wiry substance. Buddy’s an aggressive chewer with his toys. Basically he rips all the stuffing out and chews on the toy until it gets to a certain point. Then he just carries it around. He was chewing on this one when he started acting almost like he was choking. He usually doesn’t eat any of the stuff, he just makes a mess and leaves it everywhere. I don’t know if he ate something on this toy or what, but it freaked me out. Needless to say this toy is back in the BarkBox. I don’t think he’ll get it back. I don’t want him to hurt himself with it. 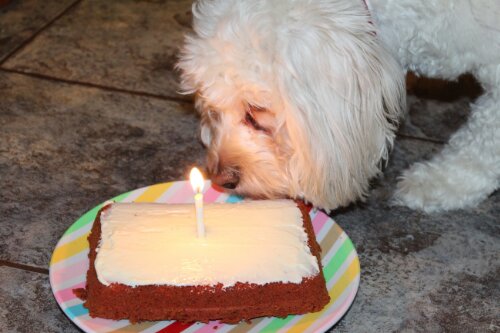 In celebration of Buddy’s adoption anniversary, I made him a red velvet puppy cake. The cake mix came in a BarkBox back in November/December so I thought this would be the perfect occasion to make it. He really liked it, although we did cut it into four pieces so he wouldn’t eat too much of it. I can’t believe it’s been an entire year since we adopted him. He’s so awesome and such a great addition to our family. We’re so grateful and blessed to have him and I hope he feels the same way about us. We’re definitely looking forward to many more years with him. And if you’re looking for a furry friend to add to your family, please consider adoption. They’re many dogs out there like Buddy who just need a good home. And no, baking your dog a cake isn’t weird at all…