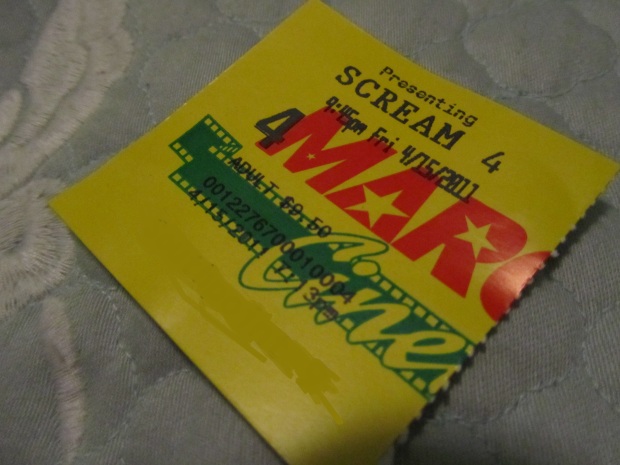 I just got home from seeing Scream 4. I’ve been waiting for this movie since I first heard it was coming out. Was it good? Yes. Was it clever? Yes. Did it poke some fun at all of the movies that have copied the original? Yes? But was it great? I’m not sure yet. I don’t know what I think as far as if it was great or if it stands up to the others. I think it falls right in line with the rest of them and is perhaps better than some of its predecessors. To be sure, I’ll have to watch it again without the audience. Yes, I understand that sometimes there are funny moments mixed into otherwise scary movies. However, do I really want to hear your every little thought for two hours? NO! Here’s a tip. What you think is witty and clever, probably isn’t. Fine, make your one or two comments about the girl running up the stairs when she should go out the front door or about the dumb chick in a parking garage who looks under car instead of pulling out the mace and running. I get it. It’s annoying. But then SHUT UP! I’m aware you think you’re funny. I’m aware that maybe your girlfriend dragged you to see this movie and you’d rather be down the hall where the bombs are going off as some over steroided up meat-head with a 35 IQ is trying to outwit a criminal mastermind. By all means, go down the hall, buy a new ticket and see another movie because I don’t want to hear your commentary. I want to watch the film I’ve been waiting to see and paid almost $10 bucks to see. Thanks!